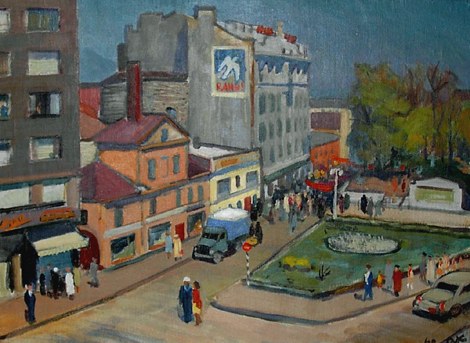 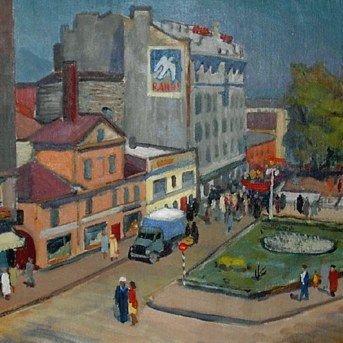 Raivo Korstnik was quite recognized during his lifetime (more than 30 years of the lecturer's career), but he was an artist who was pushed to the background because of certain personal and creative contradictions and who had only one personal exhibition in his lifetime. On the corner of the Valli street and Pärnu road is an expressive example, why the art nomenclature, having stressed the canons of realism, rejected Korstnik, but how the artist, by keeping to his principles still painted in different manner than it was foreseen. In addition to the art historical value of the work should be looked at the year of painting that makes the work of Korstnik remarkable not only in the context of the social realism of the 1950ies, but also seems to be a foreplay to the pop art of the 1960ies. The painting is also remarkable while taking into consideration the general picture of the creation of Korstnik, as it differs from landscapes that partially reach expressiveness.
Korstnik, who was closely connected with cinema all of his life, records like a film camera presumably a parade in May in the spring Tallinn. To the foreground emerge slightly naivistic, even cartoon-like colours and a big slogan Peace renders instead of a propagandist impression an ironic one. And who is there on the third floor on the left?