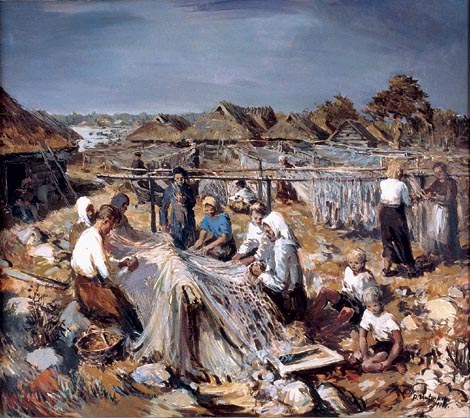 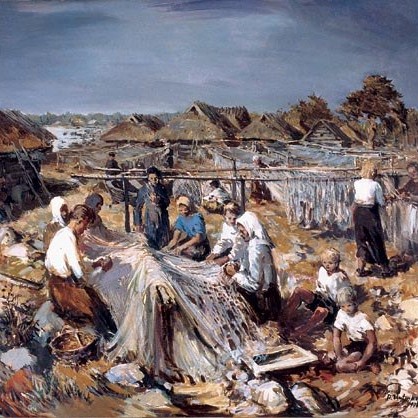 Richard Uutmaa, being born in the Altja village as the son of a seafarer and having studied in Pallas at Nikolai Triik is mainly known because of his seascapes that are not only views of the waters, as they join together the sea and the man, trying to show the meaning of the sea to a human being. In the beginning of the 1940ies Uutmaa painted several famous figural compositions, almost all of which have been bought by art museums. Net menders is because of that a remarkable work, as it is one of the few big figural compositions of Uutmaa from the 1940ies that went into the hands of private persons, that still differently from e.g. the legendary Rye-harvest is also a demonstration of the terms between Uutmaa and the sea.
As being painted during the wartime, emphasizing of work seems to be an aspiration to grasp for something long-lasting and eternal, for something that is itself sacred. If one wishes, he can see in the grievous blue sky that rises above the net menders and promises to break the current order, also a symbolistic hint to the war. The unexpected, but as interesting colouring of the painting has been emphasized, like also the brilliant use of all of the possibilities of the pallette. And is it really incidental that in 1941 Uutmaa paints sitting next to each other a woman in a blue blouse and black skirt and a boy in a white shirt?
Together with painting Rye-harvest and composition Lamb shearers the work was exposed on the year of its painting at the spring exhibition in the Tallinna Kunstihoone and with Rye-harvest also at the spring exhibition in Tartu. The work is reproduced in the catalogue of the spring exhibition in the Tallinna Kunstihoone under the name Net twiners , Voldemar Ern calls it in his exhibition review (Looming, 5-6/1941, page 721-722) The Netters. Also the Net menders have been reproduced at the Erm review in Sirp and Vasar (no. 21, 24.05.1941). Frits Matt is in 1966 of the opinion at writing about Richard Uutmaa that the mentioned works (Net menders, Rye-harvest and Lamb shearers) arise the viewers' attention and they are purchased by the art museum. (Frits Matt. Richard Uutmaa. Publishing house Kunst, Tallinn 1966. Page 10.)