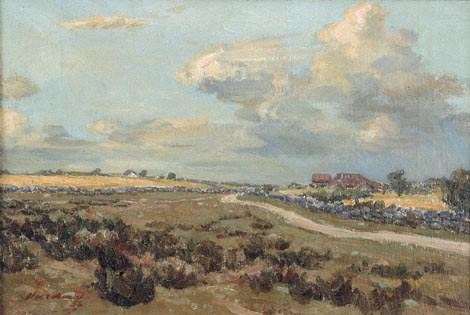 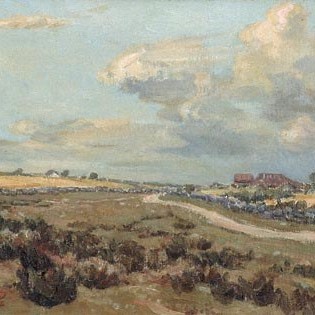 In the beginning of the 1920ies Johannes Võerahansu studied in the studio school of Ants Laikmaa, but worked after that for about a decade at his father's place as a miller's helper and as a ceramics artist at Türi. Only at the age of 30 Võerahansu entered Pallas to study painting at Ado Vabbe, but it still took him eight years to finish the school. The more remarkable is later his being the head of the faculty of painting in the ESAI and his professor's degree and the fact that without Võerahansu the Estonian landscape painting would be totally different.
Work that most probably has been painted at Lääne-Saaremaa or Sõrve brings clearly out Võerahansu's brilliant ability to see the landscape. Trees have been painted on his painting into small bushes, instead of the mountain has been sown grain and the melancholy pathway seems to be here today for the first time. The amount of sky is on the picture unexpectedly big for a landscape, still Võerahansu avoids from expressive cloud exposition or intrusive pointing to the sky. Rather the emphasis is on breathing in the air, with big gulps and avariciously.