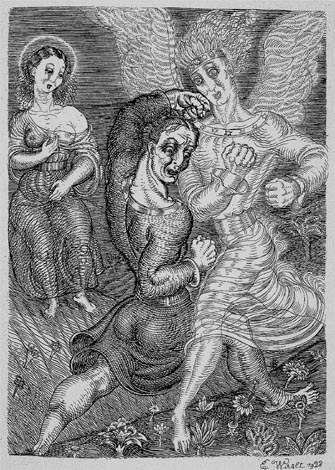 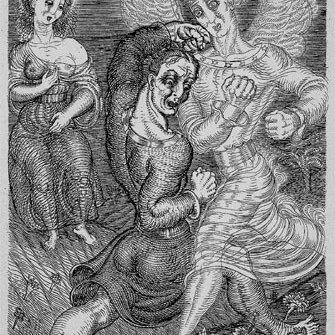 So much has already been written about Eduard Wiiralt that it would be very hard to add something new. Still the rarity of the illustrations to La Gabrielide makes writing of the artist again gripping. Besides, we have got used to connect his name first of all with free graphics and Wiiralt's book graphics has been discussed unfairly rarely. Still, experts regard his illustrations to be of equally high level with free graphics and hold that the illustrations to La Gabrielide belong to the undoubted top of Wiiralt's creation.
In 1928, while living in Paris for the third year, the publishing house Editions Trianons ordered from the artist five copper engravings for the opening book of the series Le Bocage des Plaisirs that was meant to become a bibliophilic rarity because of its small impression already beforehand. A series of single pictures, originating from the book that was printed in France, has rarely been seen in Estonia, presentation of the integrity that consists of five sheets is a remarkable event. Wiiralt's works here are recognizably in his style: with subtle and exact engraving skill have been forwarded playful scenes, possessing erotic shades.