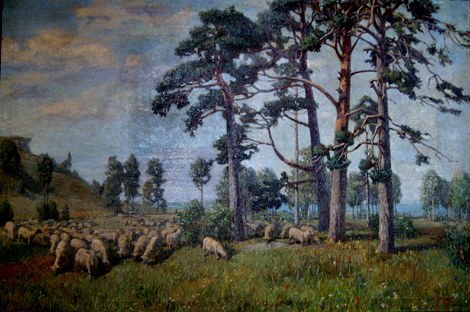 Märt Bormeister started his studies in the Riga Artistic Vocational School, where his main teachers were Roman Nyman and August Janses. Later he became a lecturer at the ESAI, where he delivered lectures for 45 (!) years running. From his creation are mainly emphasized still-lives and city scapes, the basic texture of which is sincerely simple and cordial. Also are known Bormeister's monumental compositions, where the artist has revived August Jansen - style of national- romantic spirit.
The extraordinary power and large format of the current work convinces us that for Bormeister it was not just an exercise, but a voluminous undertaking, where it was necessary to implement all his skills. From the perfect composition to optimistic faithfulness to nature, from carefully consider choice of colours to the creation of sweet atmosphere. In the 1950ies large format was often a standard that had to be filled with themes that were given with an ordered work. Bormeister has been able to avoid obligatory rules and has painted an extraordinarily powerful and thoroughly elaborated painting, which is free from any kind of political pretensions.