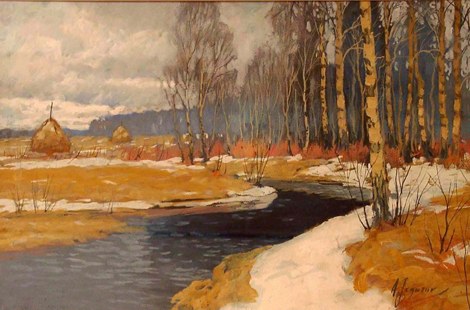 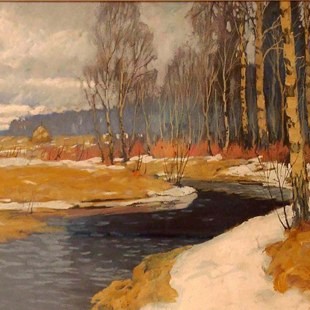 Proceeding of Andrei Jegorov from the tradition of the famous Russian realism is not surprising, if we remember the study environment of the artist. At the beginning of the century Jegorov visited several art schools of St.Petersburg and was later a free artist in the same city. In the beginning of the 1920ies Jegorov lived already in Estonia and quickly became one of the most outstanding artist, having proceeded from the school of the Russian realism.
The most outstanding part of the artist's creation is formed by landscapes that he interprets in a traditional manner. But Jegorov's approach is not limited with as exact depicting of the reality as possible, which he actually does accomplish brilliantly. The chosen motif - border between winter and spring - tells us that the author has carefully looked for (and found) a moment that expresses living and moving of the nature.