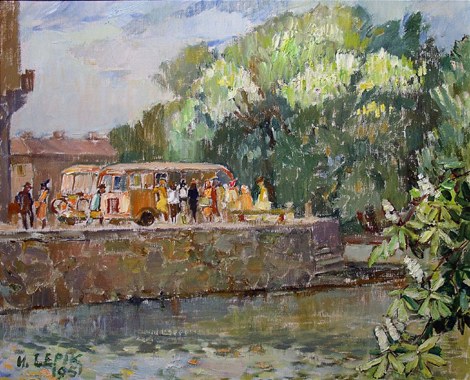 Hugo Lepik is another artist, whose wider recognition in the post-war Estonia was made impossible, as Lepik left in 1944 for Sweden. Still he was able to become an outstanding artist already before the war. After the studies in Tallinn and Germany he started to run graphics workshops and took up work as a teacher of free drawing. In the year 1939 is said about him:"It is remarkable that a specialist of the graphic art has become known to the public mainly as a painter and also as an outstandingly successful painter."
Seven years after leaving the homeland, Lepik was standing somewhere in a small Swedish town and watching from behind the easel people, entering a bus. As a painter of town environment Lepik depicted on his picture both big green trees and chestnut blossoms in the right edge of the work and also a Madam in a red beret and a gentleman, carrying the suitcases. As the recording of the modern town life the picture is like a nostalgic retrospect of the life of a small town of the 1950ies. With a similarily good portrait Lepik is able to create a view of the town which can be applied always and everywhere. Especially in spring.