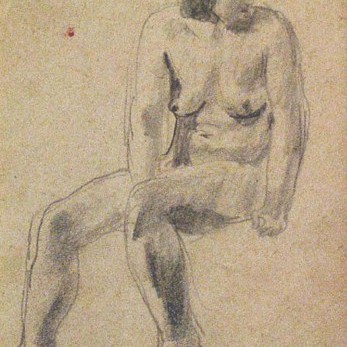 Ülo Sooster is an artist, whose name could not mean much for the wider public a decade ago, but by now he is called an indisputable leader of the modern Estonian art. It was the people, having gathered around him, who strated searching and testing both in Estonia and Moscow and therefore it is justified that Sooster is regarded to be one of the few Estonian artists, whose name is also important on the international level.
Sooster entered in 1945 the former "Pallas" that had changed its name upon changing of the power, but not yet considerably its essence. During the four-year study period his main teacher was Elmar Kits and the best friend Valdur Ohakas. Already then was formed a small grouping among those, having studied in Tartu, who got together and regularly disputed about art-related problems. They met in Tartu cafés, lent each other professional books, disputed, disputed, disputed. And when in the year 1949 Sooster, Ohakas, etc. were arrested, then a part of the accusation was even correct - they really wanted to leave, either for Paris or Italy, in order to get acquainted with the local artistic life.
In case of the drawings of the 23-year-old Sooster first of all should be noted and wondered that history has preserved works of the young art student. Works of the student, of who in the year 1947 could not have been expected the following events. Obviously also these drawings were made just in a café, where Sooster used to sit and quietly wheezingly sketch something. Then he lifted his head and uttered a couple of words. As the dispute was at the moment heated.