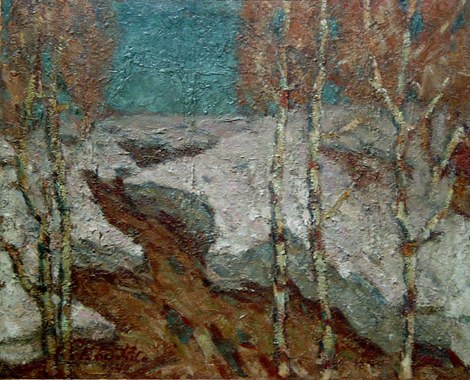 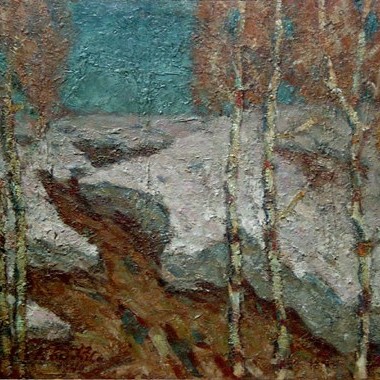 Konstantin Süvalo started his art studies only at the age of 25, when he as an assistant station-master had been able to gather a sufficient sum for beginning learning. But determination took Süvalo soon to Vilhelms Purvltis, the impressionistic style of whose students (Villem Ormisson, Paul Burman) followed the character of the Purvltis creation. "The Latvian school" was followed by "the Russian school" that remained short because of the beginning of the World War and in the end of the 1920ies was a yearly stay in Paris or "the French school". Later the artist worked for decades in Pärnu as a drawing teacher, who taught among others also Karin Luts, Jaan Jensen, Olev Soans, etc.
The most valuable part of the Süvalo creation is formed by his landscapes, the structure of which is based on the colour. It was in the 1930ies, after the Paris trip, when started the "peak" of Süvalo that lasted to approximately year 1945, when strict regulations stopped the author's thick-coloured and powerful painting manner. The present work was painted during the war years, when Süvalo was at his hometown Pärnu and painted only a few oil paintings, but mainly Water-colours. We see already familiar impressionistic choice of motifs and thick color massives that are only characteristic to Süvalo.