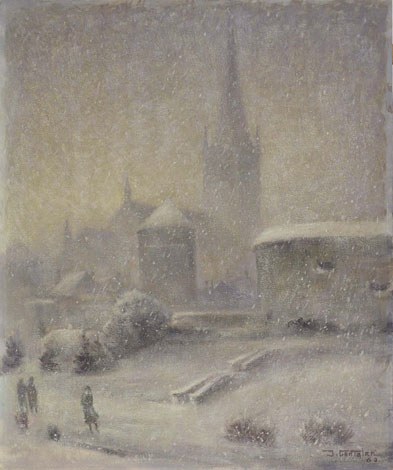 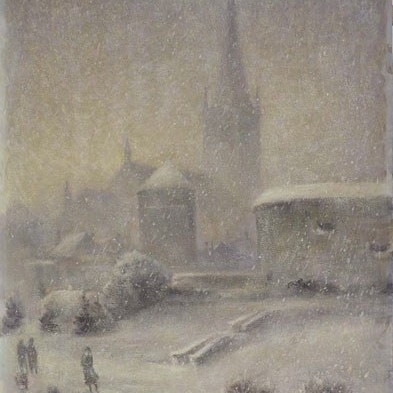 Julius Gentalen together with Endel Kõks and Eerik Haamer belongs among these, whose best creative years remained in the exile period. Gentalen, having left Estonia at the age of 41, had been by then active in the artistic world for a long time, even though he had never especially been fascinated by academic art-related education. This did not hinder him to become an artist, whose works were acquired into its funds by the Estonian Art Museum and who became after his departure from Estonia a highly valued lecturer in the USA.
Talvine Tallinn (Tallinn in winter) that was painted in the year 1961, shows an interesting shift in the creation of Gentalen, who was valued as an outstanding painter of cityscapes. Here the author has concentrated on winter instead of usual spring or summer, the meaning of which could be analyzed on two levels. From one hand the slightly faded and melancholic white of the snow also changes the city, giving the old Tallinn new dimensions. From another hand, let’s remember that the work was made 17 years after leaving of the homeland. In such light the snow starts to play with different shades of meanings that have been acquired by the colour of white in the course of time: with wistfulness, yearning, hope...