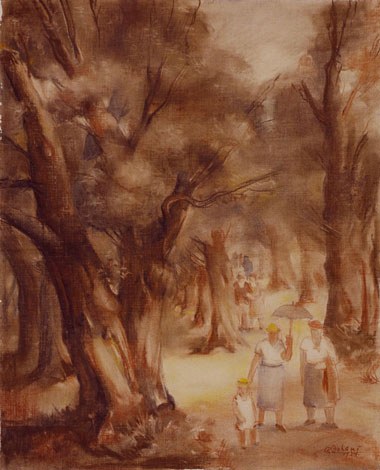 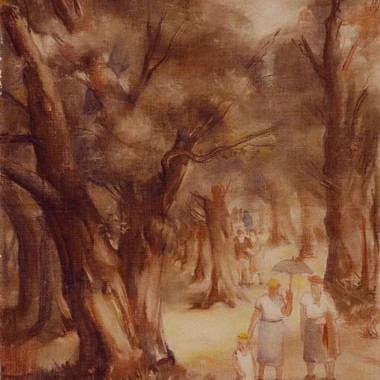 Andrus Johani is repeatedly and in a justified manner been compared to Eduard Wiiralt. Even though because of his early perishing Johani could not achieve the internation grasp that could have been comparable to that of Wiiralt, he became in a remarkably short period in the local art history a remarkable figure and genre painter. In 1933 Juhani graduated from “Pallas” as the student of Ado Vabbe and started to work as a freelance artist. Already in 1934 he was invited to the opening exhibition of Kunstihoone, where Johani exposed four works. The current work is an interpretation of painting “Pargis” (In the park), which created a lot of attention and “Pajude all” (Under the willows) that were exposed by Johani at the mentioned exhibition. As “Pargis” has disappeared and “Pajude all” is in the collection of the Estonian Art Museum, then the current work gives us an idea, why Märt Laarman wrote of Johani that “the lines of trees have been created with reverberating splendour” and that the artist “has developed in the very best direction”. Mai Levin marks pertinently that Johani is characterized by remarkable buoyancy and joviality. A carefree park scene reflects the creation of Andrus Johani from its best side, being at the same time also a variant of the best known works of the creation of the artist.