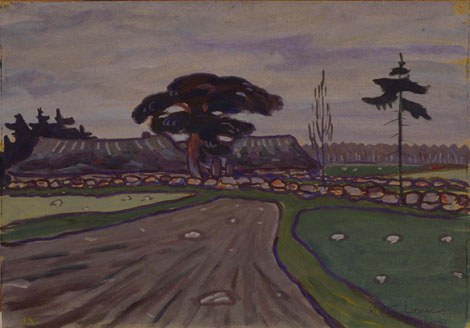 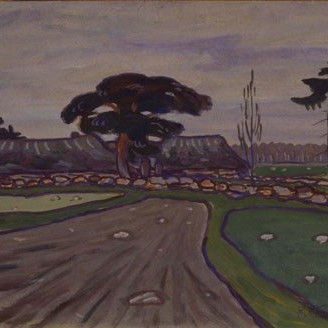 Arrival of Johannes Võerahansu to art was at the same time fragmentary and inevitable. Great artist Ants Laikmaa accepted the 17-year-old youngster as his student, but after graduating from the studio school Võerahansu returned to his home at Harjumaa, helping his father to build up an old farm near Raikküla.
The present work is an extremely rare specimen from the early creative period of Võerahansu that also participated in the first exhibition the artist took part in. In the year 1923 in Laikmaa studio school was set up the 20th anniversary exhibition, where was exposed a great number of Laikmaa’s students’ works. Võerahansu’s paintings, incl. the present one, created a lot of attention among the other works. “Remarkable”, was written in the Päevaleht. “From Võerahansu we can expect an artist, who makes people talk about him,” was written about the 21-year-old artist in another issue. At the same time was said that in spite of Laikmaa’s example Võerahansu is “most straightforward towards the master” – the most independent and most easily recognizable one. The same qualities applied also towards the choice of motifs – most probably by depicting the home farmhouse Võerahansu also turned to those things that really were “close to heart”.