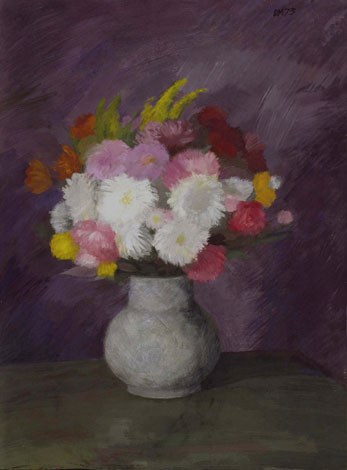 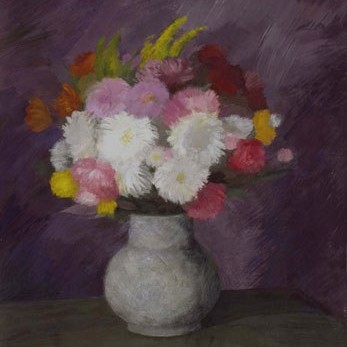 Olav Maran. Indisputably one of the most outstanding artists of the second half of the 20.century, who is known by art history both as a radical renewer and a creator of old-masters-style of still-lives. Both poles are called extremes and the gap between them is marked with the year 1968, when took place Maran’s deeply internal change. Before that period there were collages and abstract experiments, first surrealistic paintings of the era (in the year 1959!) and indisputable leader’s role in the local modern art. We can claim without an exaggeration that it was Olav Maran, who was able to get started all following innovatory artistic styles. After the year 1968 is talked about old craftmanship – of the traditional still-lives by Maran being “measures of technical perfectness and professionalism”. He starts depicting everyday objects without any interventions, but still his still-lives receive a charge with a religious message.
But is such a gap between two creational poles of such a great importance? Isn’t it so that we can talk simultaneously of the “early” and “late” Maran, about certain mental attitudes and certain “internal states” (Anu Liivak)? Isn’t it so that the so-called “religiosity” that is detected in the artist’s still-lives is not so much connected with a certain religion than it is a certain mental core, the human inheritance, from which everything starts? Being above all possible traits and fashion trends, prohibitions and urgent recommendations, vulgarity and vanity of different eras, Maran is able to pour into his pictures the sublimity and persistency of a certain period.
The current work remains in the breaking stage of the creation of Olav Maran. This an example of the first half of the 1970ies, when people freshly remembered radical experiments, reflecting modestly in idyllic landscapes and still-lives. In this work are in a clear and powerful contact the “early” and “late” Maran, classics of the Estonian modern art of the 20.century and basic traits of the human culture. “Sügislilled violetses gammas” from one hand reminds us of a traditional flower painting, but that would not be Olav Maran, if he limited himself with just another bouquet of flowers. Yes, we can see the hand of a master, brilliance and – while quoting art historians – “the yardstick of professionalism”. But the deep internal attitude can be detected clearly. Maran paints without any false posing, regarding of considerably greater importance deeper values, reflecting in everyday life – for example in a bouquet. From another hand Maran uses also here the experience of modern art, experimenting with stylizing of the room and by original interpreting of the harmony of colour compositions that he gave up later. But what he has not given up, is the deep human dimension of paintings. He has not given it up already for decades.