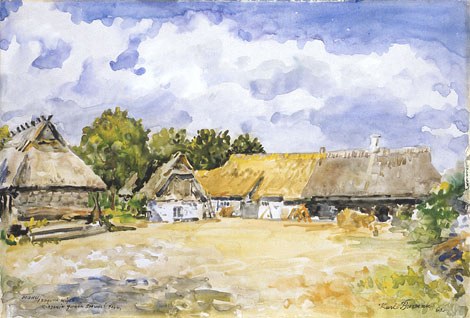 Karl Burman’s educational way has thoroughly been influenced by famous Russian art traditions. Studies in Moscow and afterwards in several schools in St.Petersburg, incl. in the higher school of arts of the Academy of Arts of St.Petersburg, made Burman one of the most outstanding artists of the beginning of the 20.century. Burman’s role as the founder of the national architecture was extremely impressive, but still also comes forward the water-colour painter Burman. In his favourite technique he often concentrated on cityscapes, through which he was able to give a more romantic and picturesque interpretation of architectural objects.
In case of “Koguva küla”, instead of being absorbed in details, Burman has concentrated on the mood: melting together of the colours and light in such a manner, the result of which is transferring of a farmhouse picture into a story. It tells us of the history and nature of one island, of people and the sky, of a ladder under the eaves of the house in the middle and of dispersing spots of light in the farmyard. No wonder that the place, which has been brought in front of our eyes, has been so inspiring to Juhan Smuul.