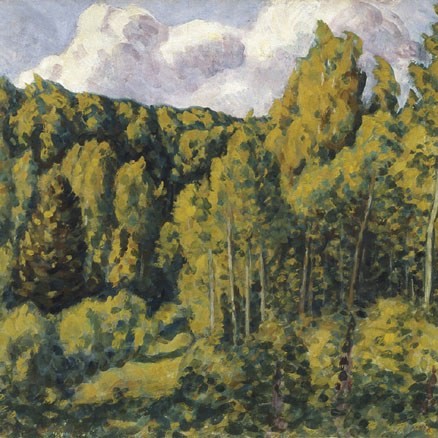 In spite of a seemingly fragmentary approach, Paul Burman’s arrival to art was continuous and unshakable. During the period of eight years he studies at Laikmaa and Purvi^tis, in St.Petersburg and in Moscow, he travelled in Paris, the Crimea and Germany, apparently being totally satisfied nowhere. It has been remembered that most of all was Burman disturbed, when there was a standstill in art, which was reflected by repeating of the common truths and there was rather a concentration on dry copying than lively and creative interpretation. Maybe just because of that Paul Burman became in the Estonian art history one of the most convincing, purposeful and successful impressionists, who despite the short active creative period has remained a separately standing landmark.
“Metsamotiiv”, having been accomplished at Burman’s peak, has picked out the colour green, but exposes skilfully all the most concealed variations of this colour. Mystery of the motif is enhanced by Burman’s carefully measured amounts of colour, which can bring out the mystical layers of the forest. As a brilliant artist, Paul Burman has opened here with a rarely exact brush work up a motif, which at the first sight seems to be well-controlled, by turning it into both an intimate and forceful one.