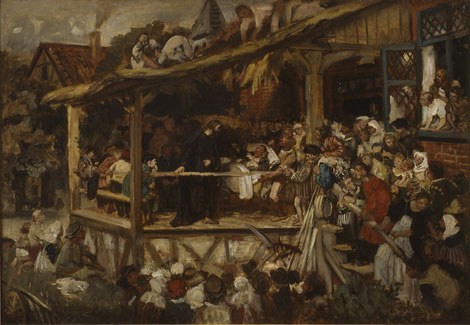 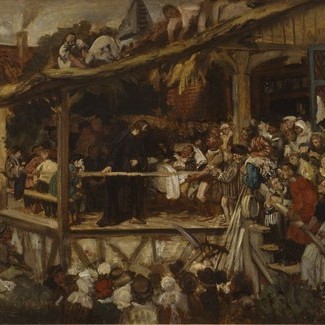 Eduard Gebhardt together with Gregor Bochmann forms a forceful and legendary “Düsseldorf school”. It is justified that they are considered to be artists with internationally known names, who possess clear ties with Estonia. Similarly to Bochmann, also Gebhardt was born in Estonia, but left the country at the age of 15, in order to acquire an artistic education in St.Petersburg, then already in Germany. For almost 30 years Gebhardt worked in the Düsseldorf Art Academy as a professor, picking continuously academician titles from Berlin and Munich, Dresden and Vienna, Antwerp and Belgium. The honourable doctor of different universities received continuously orders both from Germany and abroad. His works were acquired into the collections of the Berlin National Gallery and the Düsseldorf Museum of Arts. Even though his name was widely known in Europe, the son of the Järva-Jaani pastor is first of all known as the renewer of the German religious painting.
Critical turn in the art of a big state, having been caused by Gebhardt, who received a Lutherian upbringing, is even more remarkable, as the positions of religious painting were in the second half of the 19. century remarkably strong. Gebhardt was able to interpret Piblical scenes with powerful meanings into art so that the intrusive word of God turned into a story of the man. As a Lutherian, the artist continuously wondered, why the painting language has not accepted the Lutherian approach, which gives the solemnity a secular shade. After the trips to Holland, Gebhardt started to approach the subject by implementing the traditions of the painting of Flanders, emphasizing “in the subject, colour and composition a reasonable and logical system” (Anne Lõugas).
“Kristus tervendab halvatut” repeats thematically one of the most well-known works by Gebhardt, cycle of the mural painting in the refectory of the Loccum monastery. This is a superb example of the artistic peak of the artist in the 1890ies. Here we can detect the skill of a brilliant artist to create powerful figural compositions, where the role of each character has been played out with extreme subtlety and where a piece with a complicated structure becomes easily readable. The work contains dramatism and rare nuances of colouring, an impressive sense of room and extraordinary grandiosity, which can very rarely be seen in the local paintings.