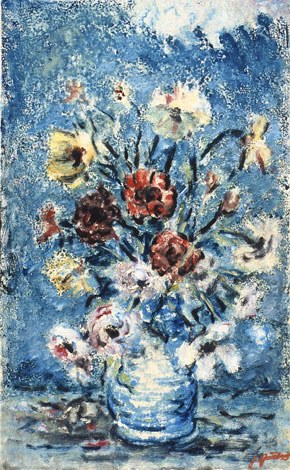 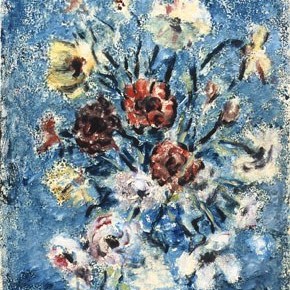 Jaan Grünberg’s receiving of the artistic education was from one side regular, from another side fragmentary. Because of the war he was already 31, when he went to study in “Pallas” and his first lecturer could be considered Kristjan Raud, in whose studio Grünberg studied from 1906 to 1911. Let’s add also most probably the most important influence of Grünberg – Paris – and we get a picture of an artist, who is because of justified reasons called by art scientists “the most outstanding colourist of the Pallas school of painting, the most remarkable follower of the late French impressionism in Estonia” (Hilja Läti).
“Lilled vaasis” belongs to the famous Grünberg’s series of monotypes, made in Paris at the end of 1930ies. In this exigent technique the artist has until now remained the most significant author, being able to create a balanced composition and works in clean colours. Already a decade ago was written: ”His compositions come as oil paintings and as technical monotypes, which are here rare to be found, where the attention is captured by the joy of colours.” The classical floral motif of a still-life has been a pretext for the artist to experiment with unexpected colour combinations. After that he rests for a while and takes a look of the work from afar. And then he experiments again.