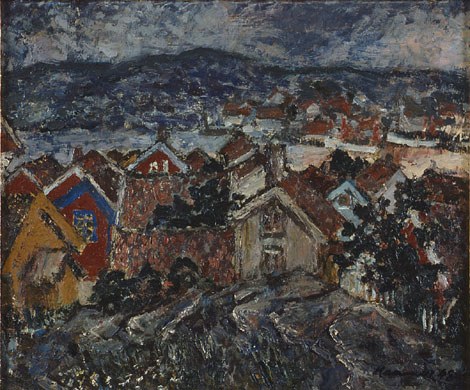 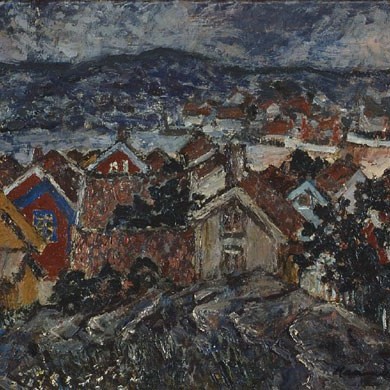 Eerik Haamer’s way to art is one of the strangest from all of the possible ones. After three years of studying physical education, he still entered at the beginning of the 1930ies “Pallas”, and having been the student of Nikolai Triik, became quickly one of the most outstanding pre-war painters. Forced flight in 1944 enables us only to assume, what the fate of Haamer would have been like while remaining in Estonia, as he was an extremely original artists, refusing to surrender artistically. From works, having been created in Sweden, has by now only a fraction returned to the homeland, but these few ones speak clearly, how Haamer’s unexplainable “standing close to life” always forwarded everything the artist was having on his mind.
“Cityscape”, having been painted only four years after the departure, connects in itself several lines. While depicting the motif, Haamer has remained dispersed and slightly melancholic, as the result of which we can see in his portrait of a summer resort town also a memory of the homeland. The impression is even deepened by melancholic-nostalgic colouring, which clearly entangles with Haamer’s paintings from the “Estonian period”. This was the time, when people were certain of reversing of time and the possibility of returning. The town here has been depicted in an anonymous manner and at the same time in a slightly melancholical way, signifying for Haamer again and first of all home. Instead of a classical cityscape we can see here Haamer himself at his artistic peak, where the intimate is mixed with poetry and where art can give life a fresh breath.