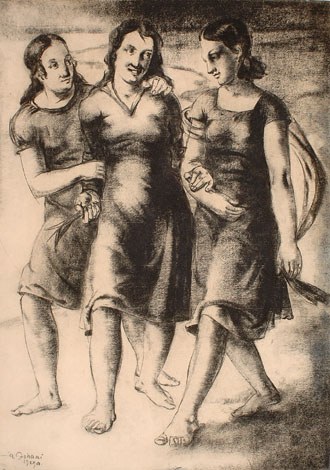 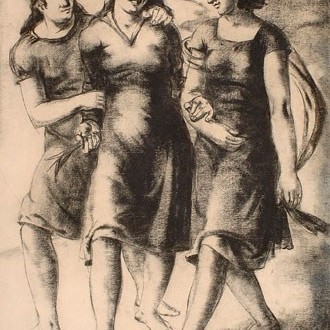 Andrus Johani, a great Estonian talent, who passed away too ealy, had by the year 1929 finished the State Artistic Vocational School and was studying in “Pallas” for the third year. Still, under no circumstances we can talk of a work of a student, but of a rare example of the earlier creation of the artist, which has been very highly valued in the art history. “In the first range drew the attention his coal drawings, that had been made with a strong realistic sense of form,” writes Voldemar Erm about the works, which by today have in addition to the local art museums have also ended up in significant foreign collections. In his coal drawings Johani demonstrates clearly, why he next to Eduard Wiiralt and Evald Okas is regarded the third great drawer in the Estonian art history. At depicting of full-length female figures Johani picked the most complicated possible way: instead of a static posture he made the model to lean, be backed against objects, turn – generally, he did everything possible to make the movement of muscles and reflection of the pose in the course of drawing as complicated as possible. “Tüdrukud” has been a challenge for Johani, where quickly become clear the values of coal – a strong line, rich in shadows. In addition to the human body in the artist’s drawing also light and shadow start playing along. So painting-related effects join the exact reflection of the model and brilliant catching of the line.