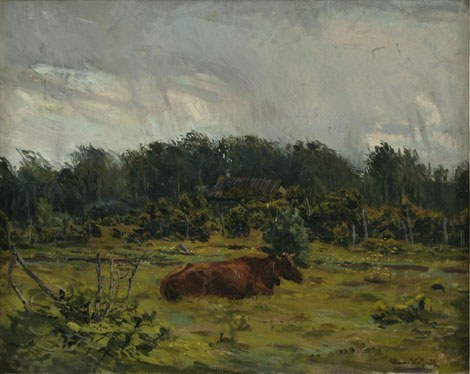 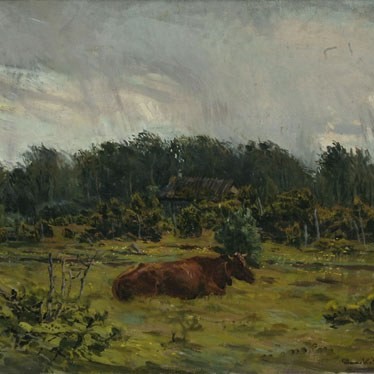 The year 1956 meant several important key-words for Elmar Kits: his second personal exhibition received extremely positive reviews, the artist had exposed himself as a “mature master”, who “sublimates the visible with his personal experience and thoughts”. In August of the same year he receives the nomination of a Merited Worker of Arts. A couple of months later Kits with his wife and Johannes Võerahansu headed for Saaremaa, to make use of his creational peak. A one-month stay on the island reminds to a certain extent things that happened with Konrad Mägi at Capri: the number of works is not big, but – by using the Soviet rhetorics of that period –“on the artistic level they offer much new and valuable”. And indeed, the Saaremaa-series by Kits belongs undoubtedly to the top of his creation. Preserved has been the extraordinary handling of air and light, which is already known from the work “Sild Taevaskoja all” and also can be seen the ability of Elmar Kits to tame the colours, but Kits also adds something new to it. The humorous choice of motives is again justified with the use of colours, the impetuous green and unbalanced blue are challenged by reddish brown, lying in the middle of the landscape. In the context of the whole autumn cycle of 1956, the work is also made extraordinary by signs, planted into the landscape, which give the evidence of the presence of the man, where the sudden positioning of a farmhouse into the heart of the picture is certainly not a random occasion. This not just a landscape painting, this is a portrait of Saaremaa.

The work is reproduced in the monography “Elmar Kitse fenomen” (The phenomenon of Elmar Kits), under no 423 in the catalogue part.