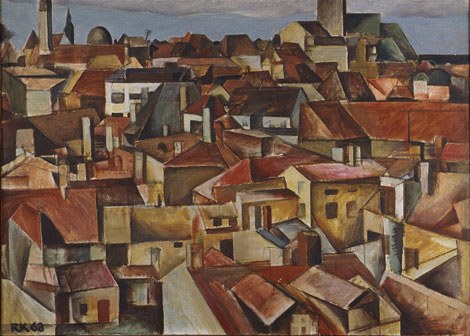 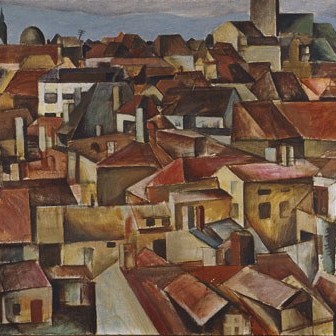 Raivo Korstnik is an artist with a strange and unjust fate. Korstnik, having studied during the depression decades in the ESAI and having started with an active creative activity at the beginning of the 1960ies, is gradually more often referred to as being placed in the same line with Henn Roode and Olav Maran. His role in the painting reformation of the 1960ies is emphasized and hints are being given of the artist’s good relations with the young emerging avant-garde generation. It is understandable, why Korstnik retired from active creating and by doing so even more concentrated on teaching.
“Vanalinna vaade” was made during the creational peak of Raivo Korstnik and even from here we can draw different leads. One of them takes us directly to the cubist stretchings and deformations, prevailing during the 1960ies, another to the legendary year ´68, when limited freedom was also possible in art. The third takes us to the formation traditions of the old city, of the postcard character of which the painting by Korstnik is totally different. Instead of an ordinary tourist sight, Korstnik actually grasps the essence of the city – grasps the movement, flow, life, but also strange broken angles and the lifted horizon. This painting is a specific set of notes, and music which has been played according to this, is characterized by rhythm, which has been completely elaborated and which has well-calculated correlations and transitions.