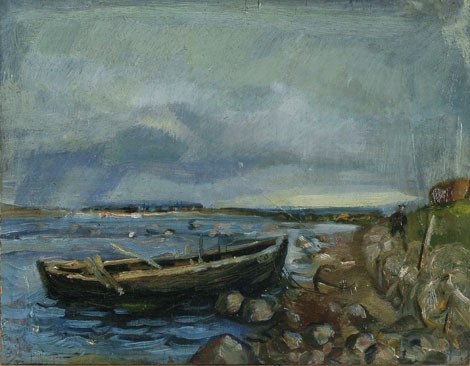 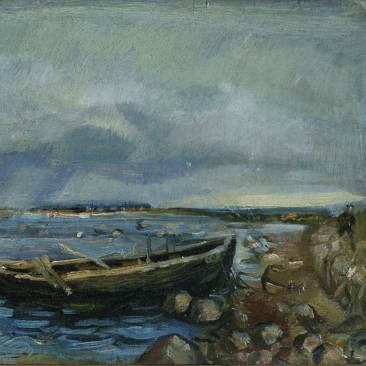 With the name of Evald Okas have been fixed in the Estonian art history certain quality measures, which all deal with the creation of Okas since the first half of the 1940ies. Extremely rare examples of the creation of the 1930ies of the grand master of the local painting enable us to talk in addition to art historical rarity also of unexpected traits. Having commenced his studies in the State Artistic Vocational School already at the age of 16, Okas graduated from it only a few weeks before finishing of “Kopli rand” in the year 1937, continuing afterwards his studies in the State Higher School of Arts.
Of the scarce heritage of Okas from the 1930ies are mostly known portraits and nudes, next to which “Kopli rand” is a rare example of the artist’s skill at taming of the nature. The intimate format of the work is considerably different from the famous giant mural paintings by Okas, feeling so direct and sincere and offering us the possibility to glance at the craftmanship of the young author. Handling of the brush by Okas is once for painting of rhythmical waves, then for creating of more detailed contours and colour mixes. He skilfully contradicts also the darkened sky – at the depiction of which from the colour blue have been derived at least a dozen different hues – and the last rays of sun at the horizon. But first of all this is a portrait of the perishing world, of time, when the relationship of the man with the sea was still personal and when giant ships were replaced by oar boats, floating in the coastal waters.