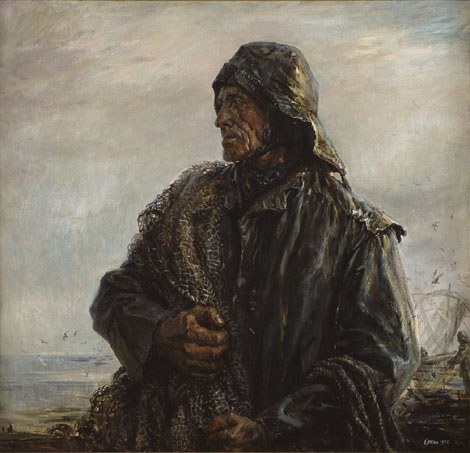 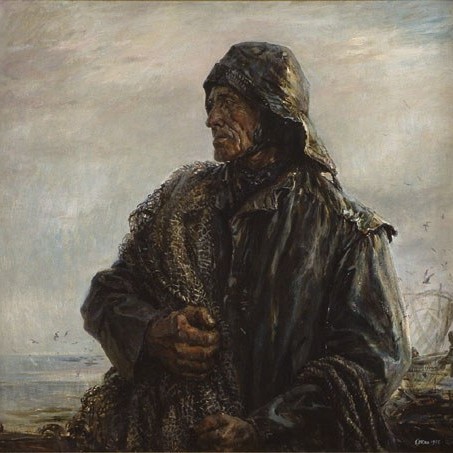 It is more than complicated to name a work from the creation of a fruitful and outstanding artist, which could arise more attention than “Vana kalur” does. Okas, who was at his artistic peak at the time of painting of this work and whose realistic and true-to-life painting manner could develop freely during that period and achieve perfectness, showing the signs of certain maturity, was in mid-1950ies an artist par excellence. The current work reflects the author’s equal brilliance at catching of the details and at creating of grand generalisation. The work tells us of the ability of Okas to grasp nuances, which make the whole picture alive, proves once again, how a strong drawing base is joined by a painter, who is superb at using of colour relations, being able to bring out even the moisture of the clothes of the fisherman and his wiry hands. Okas, who a year before had been elected a professor and who two years later chooses the cover of his monography to be this “Vana kalur”, is here undoubtedly in his top form. With an impressive observation ability he concentrated on his current favourite motif, at the depiction of the coastal people, observes them closely and tries to catch what is of utmost importance – the real essence of a fisherman’s life. Therefore “Vana kalur” can be described as a superb painting technique – related forceful method and also as an example of subtle psychology, a detailed generalisation and a pertinent historical model. But all of this has been shortly summarized by Evald Okas himself, when he said: “I observe people, and do it continuously”.