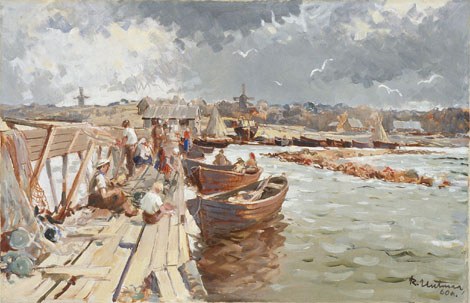 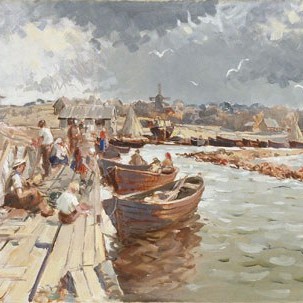 Reasons, why Richard Uutmaa became the best painter of sea life in the Estonian artistic history, can actually be searched for in his childhood. Uutma, having been born at sea as a seaman’s son, most probably did not have many possibilities, where to continuously return in his creation. After having graduated from “Pallas” as the student of Nikolai Triik, Uutmaa quickly became an author, with whom are associated the introduction of coastal life into the Estonian art. After the war Uutmaa started to travel in Estonia and during the years 1958-1961 he stayed at Saaremaa, where obviously has also been painted “Paadisadam”.
The biggest number of the creation of Uutmaa is formed by his landscapes, in art history are undoubtedly most valued and by the museums most of all searched and the most rare ones these works, where he binds together man and nature. “Paadisadam”, having been painted characteristically to the style of the artist of that period, with soft colours and plenty of light, uses very different registers at approaching of the sea thematics, moving between them remarkably naturally. The results of the artist are equally brilliant at painting out of the water ripple under the boat, at detecting of the open panorama and at melting of groups of people into the landscape. Even the smallest details bathe here in the enjoyment of colours, starting from the scanty white of the seagulls and finishing with the skirt red and optimistic grey of the fishnet shed. But the artist himself stands at the end of the pier, looks at Saaremaa and picks out everything, without which the life would seem dry.