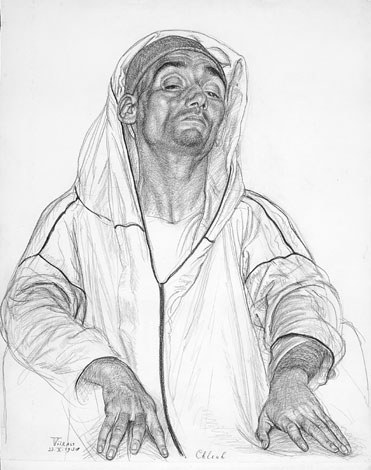 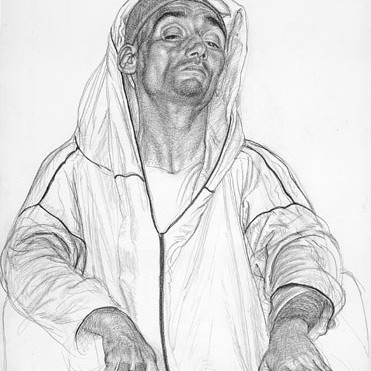 It is hard to find a drawing by Wiiralt, which has created more attention and the fate of which would be equally legendary. “Oopiumi uimas” was made in Morocco, where Wiiralt arrived in the hot July of 1938. The trip, which initially had been planned to be a short one, was prolonged, as the artist was continuously inspired by the local people and landscape, working eagerly and drawing portraits of the locals. This work is most probably made during the first months of staying in Morocco, as at the autumn exhbition of 1938, which was held a couple of months later in Tallinn, “Oopiumi uimas” was already hanging on the wall. The work created extraordinary attention, “an especially popular drawing” (Mai Levin) was immediately reproduced in the monography of Rasmus Kangro-Pool and it became one of the few drawings, which were made in Morocco, which has not ended up in the collection of the Estonian Museum of Arts through the mediation of art collector Alfred Rõude. After the confusion of the 1940ies, “Oopiumi uimas”, which was in a private collection, was hidden for decades, as the owners were afraid of possible repressions. Art historians regarded the work until not to have perished and looked up the repro, having been published in the monography in order to publish it for example also in the work of Ott Kangilaski from the year 1959.
Popularity of the work is easy to understand: also here the approach of Wiiralt to the depicted material is under a unique angle, regarding of the utmost importance the extremely skilful depiction of certain details. The artist has chosen the most complicated moments, concentrating on bringing out of the face and its nuances. Already the title of the work says that differently from the ordinary veiled women and large-eyed children, “Oopiumi uimas” is a remarkable exception in the whole Morocco-series of Wiiralt, depicting a man with half-closed eyelids. Catching of the enjoyng glance, finding of lines, characterizing chleuh, talking of the person by judging from the position of the hands – all of this has been a challenge for Wiiralt. The extremely rare and famous original painting of the grand master of the Estonian art has accepted the challenge.