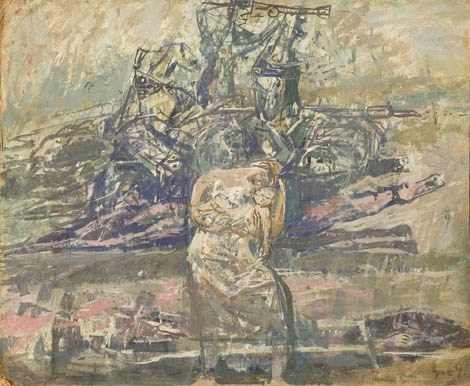 Several art scientists regard Elmar Kits in a justified manner the most significant Estonian colour master and the most fruitful experimenter of the 20.century. Only a year after graduating from “Pallas” as the student of another great improviser, Ado Vabbe, Kits himself became a teacher in the year 1940. The following three decades know Kits as an artist, moving between different techniques and genres with an expressive lightness. Kits, having been extremely highly quoted by his contemporaries, was an artist par excellence, whose life was completely dedicated to the endless research of the expressive means of a painting.
During mid-1960ies starts the last and most attention attracting creative period of Kits. Mentioned are especial improvising skills and the abundance of approaching angles, his two personal exhibitions become the landmarks of modern art. “Hirmus unenägu” was made as a sketch for a bigger work, which Kits could not finish anymore. Typically to Kits, he uses on his painting the theme with a political accent, which reaches a certain general human dimension. The unstoppable playfulness of the background and the figural composition with a tragic accent on the foreground form together a painting with an extremely powerful message. By using the artistic values of his best creative period, Kits comes here to ethical generalisations, which was seldom the case with ideologically assimilated authors.

The work is presented in the catalogue part of the monography “Elmar Kitse fenomen” (“The phenomenon of Elmar Kits”) under no. 842.