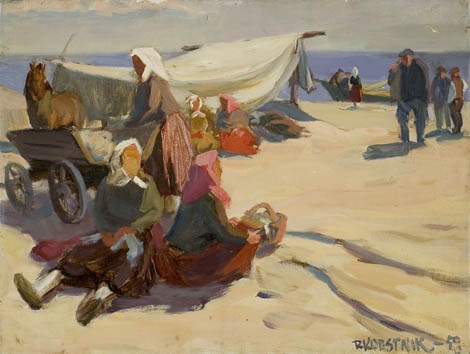 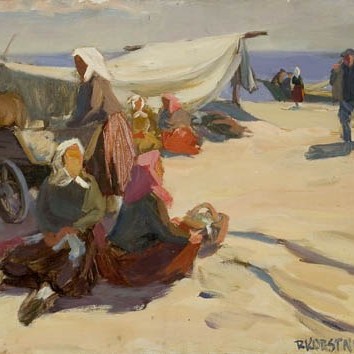 We actually find no good reasons from the biography of Raivo Korstnik, why the artist again and again ended up at the theme of the sea. Korstnik, having been born at Ida-Virumaa and studied during the 1950ies in the ESAI, did not have a clear and direct contact with sea and with people, living with the sea. Maybe the present “Kihnu rannal” is one of the earlier signs of Korstnik’s secret attachment. During the mentioned period Kihnu became a frequently visited study camp site for art students, where were accomplished dozens and dozens of seascapes and etnographic works of the island inhabitants. Korstnik had by then already graduated from the school and leaving for Kihnu on his own has also brought about new qualities. We can not talk anymore of a student’s approach, but of a vigorous and original approach. Instead of true-to-life tinkering Korstnik unexpectedly uses picturesque freedom. People are depicted in foggy light by the means of dispersing colour spots and the room perspective has been attractively distorted. As the present work has for sure not been painted by models, then in addition to everything it is worth to notice, how Korstnik has created for himself a memory picture of Kihnu and of the core of Kihnu life. Such is the artist’s vision of an afternoon, when women are sitting in the foreground and are expecting their husbands back from a fishing trip. The latter, thank, god, can already be seen.