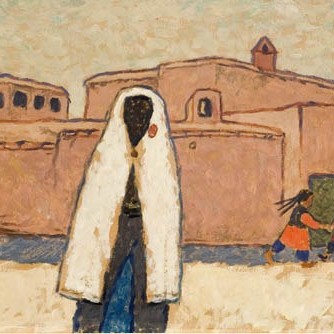 Ilmar Malin entered the higher artistic school only after the World War II, imprisonment and the Siberia-years in the year 1948. Still, after the graduation of the ESAI, he quickly became a significant author, with whose name were first of all connected the entrance of the vanguard art into the local art. Malin’s stubbornness and clear originality of his creation was still highly changeable in time, including in the later decades the top works of the Estonian surrealism.
Malin’s works, having been accomplished in the summer of 1961 in Central Asia, form a separate chapter on the artist’s creative path and some reference books start only from here studying of Malin. In the series of which by today has preserved extremely little, has been mediated similarily to Wiiralt’s Morocco trip Malin’s Asian impressions: bright-coloured, with generalised line and original choice of motifs. Evi Pihlak has written, how through stylised form and colour interpretations Malin expressed protest towards “the dogmatically nature-true artistic principles of the preceding years”. A separate interpretation machine is switched on by a girl with a dark face, being placed in the middle of the work. We may look at her as at a veiled woman, characteristic to the cultures of Central Asia, but we can also see a forceful reference to the forced anonymity and forced assimilation. Through that the chosen motif turns only into a pretext at signalling of the genally human message.