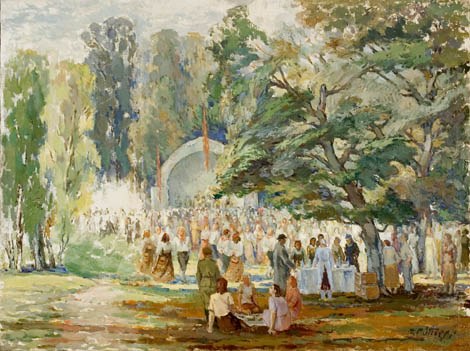 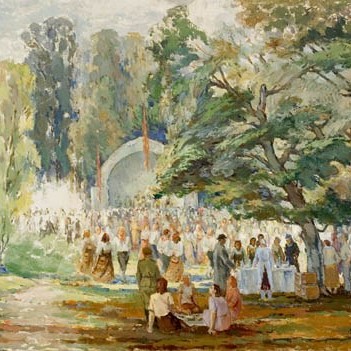 Juhan Püttsepp was similarily to Aleksander Vardi one of the first “Pallas” students, but he graduated from the school because of the break which was caused by economic reasons in the year 1929. Parallelly to his studies, Püttsepp himself started teaching art and worked as a highly appreciated teacher for several decades. As an active artist, Püttsepp won wider recognition mainly thanks to his landscapes and figural compositions, in which he is mentioned to have used warm colours and picturesque elaboration.
“Rahvapidu” is a well-known example of the artist’s creation, where are joined artistic skilfulness and aspects, which were characteristic to the period under question. Patching brush strike, being already known from other works by Püttsepp and the impressionist manner of colour using can also be detected here. Also can be added skilfulness at organising of a group of people and blending of the activity into the landscape, as the result of which we can talk of real painting- technique – related method of force. Still, nowadays we notice first of all the red scarves and white pioneer shirts, which clearly refer to the creative context. But at the same time Püüttsepp is not yet decorative or ideological in “Rahvapidu”. This painting is rather a historical document, an unpretentious view of a crowd of people, who have gathered on the painting surface.

The work is published in the catalogue of Juhan Püttsepp exhibition in Tartu House of Artists in the year 1963 under no. 263.