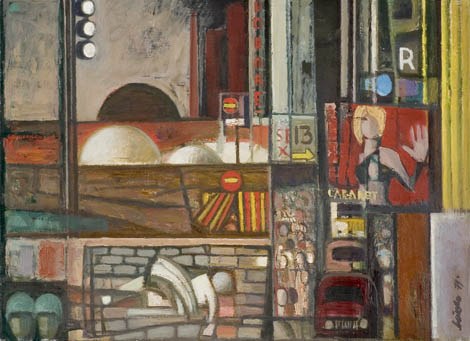 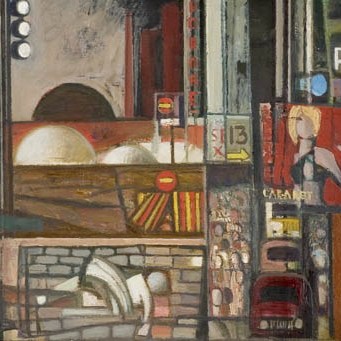 The arrival of Lepo Mikko among the Estonian art celebrities seems while looking back inevitable. First studies in Tallinn in the speciality of theatrical decorations, but thereafter eight years spent in “Pallas”. In the year 1939, when Mikko was only graduating from the school, he was already an artist, who had created great attention. The following decades witnessed changes in Mikko’s creation, but his perfect sense of composition and bravery at treating of motifs always remained unchanged. It was the end of the 1960ies, when new qualities were detected in Mikko’s works, which were crowned by several awards. That period brought into his works strongly generalised and rhythm-added forms, but even more was noticed signalling of social messages and direct reaction to the reality, which was surrounding the artist.
“Linn” is a surprising discovery of Mikko’s creation. Before the World War Mikko did not paint a single cityscape despite the general rapture towards the mentioned theme. Also “Linn” is not so much a panoramic and decorative glance, but a beauty sample of a composition technique. Furthermore: it is also thrilling to observe “Linn” in the creative context of the painting, when everything “western”, but especially the depraved city life was repudiated. Instead of depicting of the decaying capitalism, Mikko’s work glows certain mystery and desire for the city life. And what else tell us the cabaret signs and front parts of buses, half-naked ladies and traffic signs, everything being soaked into the colours of the night.