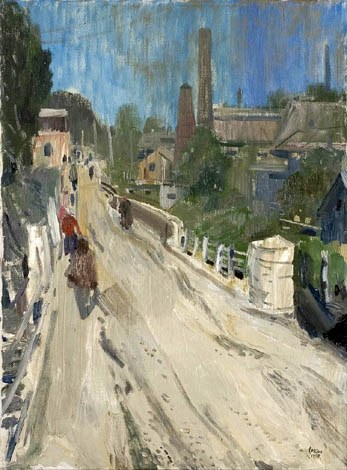 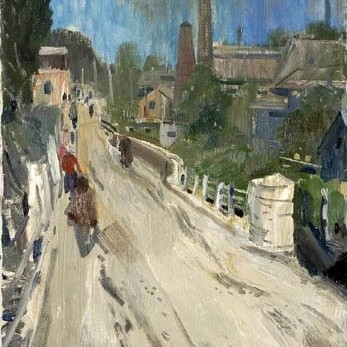 The skilfulness of Evald Okas and the diversity of his creation has convinced us that the second half of the 20. century in the local art history is to a great extent being covered by the works by Okas. Okas, having won recognition as a painter and a graphical artist, was able to graduate from the higher school of arts directly before the events of the World War II reached Estonia. In the 1950ies Okas was already a recognised artist and also then started his professor’s career, which lasted for decades.
Still, we can not speak about Okas of that period in one key. Well-known are his extremely realistic portraits and graphical experimentations, which started in the second half of the decade. “Vana Kunda” is something totally different. Here has Okas abandoned working on details and has let his brush fly. Being free-handed and brave, he does not hang on to details, but vigorously renders the atmosphere of an old industrial town. In spite of the obligations of the era, Okas does not concentrate on depicting of the industrial landscape, but on creating of a specific painting integer. The perspective, arriving directly into the centre of the painting, turns at more detailed examining out to be a street and the walking people have been depicted only with a couple of brush strikes. This is not a static honour board picture anymore, this painting tells us vividly of life in a small Estonian town.