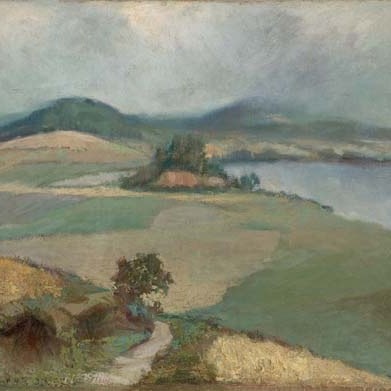 The education path of Aarne Miikmaa is a rare example of the Estonian art history, where an actively painting author has parrallelly studied art theory – related subjects. Miikmaa started his art studies already at the age of 14 at Ants Laikmaa, who in the first half of 1920ies was at his prime both as an author and a lecturer. After eight years of studies Miikmaa unexpectedly decided in the favour of philosophy and art history in the University of Tartu, but without burning the bridges. During mid-1930ies Miikmaa was again there, where he felt himselt the best – in “Pallas”, studying under the supervision of Addo Vabbe. An early death in the first days of 1942 did not let the creation of Miikmaa, who had graduated the school only four years earlier, become too extensive in numbers, because of what by today are most of all known his portraits.
Still, Miikmaa is one of the passers of the landscape painting traditions of the “Pallas” school of the 1930ies. His trips in Estonia to Mustvee, Taebla and elswhere resulted in several romantic-observing works, where in the foreground was not theoretical wisdom anymore, but landscape and its colours. Here does not exist any forced desire to organise the room otherwise and excessive colour shocks have been left out. Instead, Miikmaa concentrates on smooth transitions and a careful brush, a dedicated form vision and listening to the language of landscape.