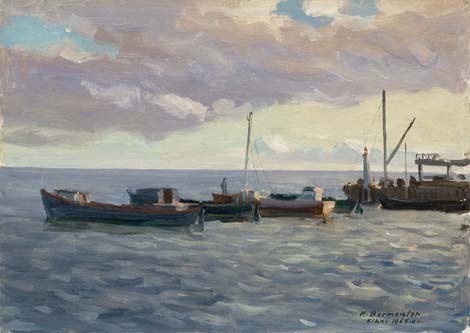 The educational path of Märt Bormeister was diverse, reflecting the author’s constant desire to acquire new experiences and different approaches. Bormeister studied in Tartu, Tallinn and Moscow, his specialities were extremely different types of art, but also for instance archeology. The diverse education received its logical continuation in decades of lecturing in higher educational establishments and compiling of study materials as an educator. ‘Kihnu vaade’ is a superb example of the ability of Bormeister to concentrate during a highly political era with the means of an intimate format on issues that were close to his heart. Study trips to the islands, especially to Kihnu, were very common in the 1950ies, but not only students, but also their lecturers found there much inspiration. Also Bormeister himself sat during one afternoon in the harbour trying to paint onto a modest piece of cardboard everything that could later remind him of that time. Odd, but it embraces everything: the quiet sea and ships floating in the harbour, the setting sun and moving clouds. And something that tells us clearly that this is neither an ethnographic nor geographic Kihnu, this is the artist’s night.