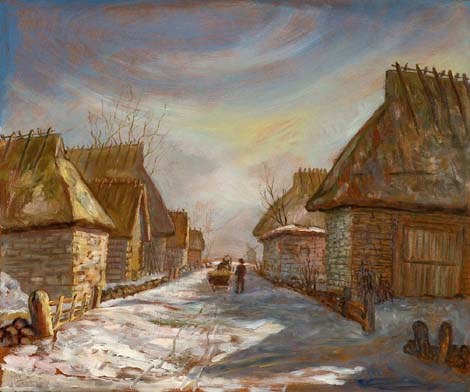 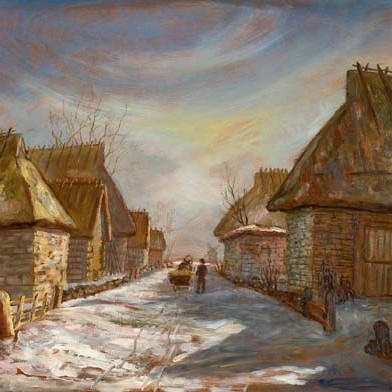 By today the creation of Nigul Espe is well known, but similarly to Priidu Aavik or Erich Pehap, the core and more valuable part of his creation is undoubtedly made up of his pre-war creation. Espe graduated from “Pallas” in the year 1932, but we do not have much information of his creation from that period, which is to a quite great extent due to the small number of works that were accomplished during that time.
The current work uses a choice of colours, which is unexpected for an experienced “Pallas” graduate. On the painting, which is obviously depicting autumn weather, Espe has chosen the most complicated road, instead of the naïve and optimistic colours, the artist had taken interest in the possibility of rendering the other face of autumn. By depicting an Old Believers’ village street in Petseri, Espe forwards also by the choice of colours the mood, the essence of one village. As a “Pallas” graduate, he can exquisitely choose from among uncountable colour combinations exactly these, through which is reflected the ascetic, poor and scanty Old Believers’ way of life, which is still serious, firm and convinced. But in addition to all of this there exists one more layer. Both the choice of colours and motifs may not be random for Espe in the year 1940. The unexpectedness and courage of the depicted material does not coincide with the joyful and vital school of “Pallas”, because of what we can see here also a certain warning, an illustration of restless times.