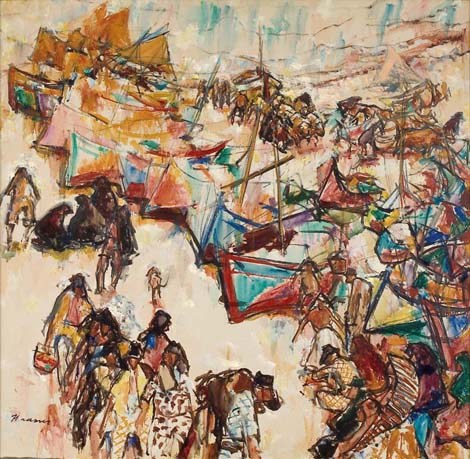 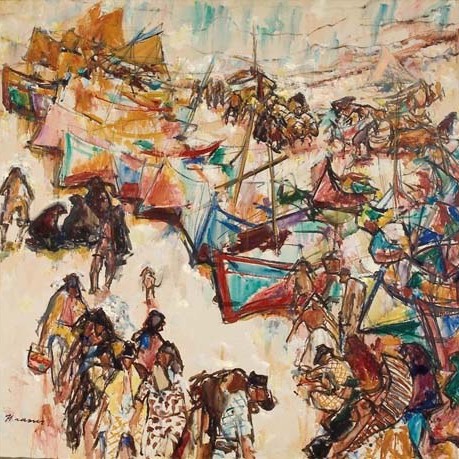 By today Eerik Haamer has become one of the grand names of the Estonian art history of the 20. century, which is even more strange, as there still does not exist a full survey of the artist's creation and there exists a more detailed survey of only his creation of the 1930ies. So each piece of art, which has arrived in Estonia and originates from a later period, is a novelty, but a painting in such a format, being painted from the mentioned period with a free hand, is an event.
Haamer came to Tartu from Saaremaa, but initially not to “Pallas”, but due to circumstances and his father’s will to acquire a “decent” profession – physical education in the University of Tartu, more exactly skiing and swimming. Only in the year 1930 Haamer took up studies in the art school under the supervision of Nikolai Triik, but a certain aspiration not to detach art from life remained a characteristic feature of Haamer’s creation. Already in the 1930ies Haamer became one of the most significant names in the Estonian painting by depicting people, living on the coast, especially the Ruhnu people. His robust works created an increasing interest at exhibitions and created a myth of the author. As a really independent creator, his stay here under complicated conditions became impossible and Haamer left for Sweden. The following is known only as fragments, but these bits have been sufficient to create the increasing interest.
It is an unanimous opinion that after leaving Estonia, a totally new approach entered Haamer’s creation after his trips to Spain and Portugal at the end of the 1950ies. From these in their turn are often emphasized works, which were accomplished in Portugal, Nazaré and which show picturesque freedom, the courage to cover the surface of the works with parts of empty spaces, impetuous handling of human figures and their unexpected grouping. But not only master class of painting technique. By 1960 Haamer had been away from his homeland for already 16 years, but he never unhooked himself completely. Karin Luts, a colleague and a person, who was also forced to be abroad, writes into her diary while describing Estonian artists: “And of course one more person, a certain Haamer, who is painting people of the shore – who symbolize the whole Estonian nation”.