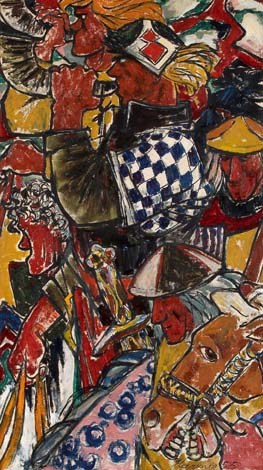 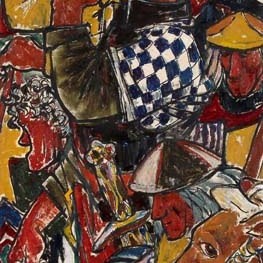 “Eepos” was painted only five years earlier than “Nazaré rannal”, but its angle of approach is completely different. Instead of the impetuous and improvised approach in case of the Nazaré coast, Haamer has filled the whole painting surface characteristically to the period with single vigorous figures. Here we can detect technical skill and extreme elaboration, proving once again, why Haamer is regarded the most skilful creator of figural composition of the Estonian art history. But the aims of Haamer have been even higher – in addition to the artistic value we can detect clear emphasizing of man, stressing of each single individual, not setting them back into the city clamour or letting them be absorbed in work. Haamer, who is obviously depicting travellers, being on the road, is here at his artistic peak, the examples of which are even very rare to find from museums. Large format matched the best the artist’s forceful, extremely convinced and meaningful style. Yes, we can read from here also a metaphor of “going” and “being on the road”, but in the first range Haamer is still interested in man. The artist forwards a clear message with the painting, which has most probably been accomplished in the studio on the basis of several sketches. People who are going, who are on the road, are not just romantic drifters, but they are filled with determination. Their accessories are war bugle and sword, but their looks and postures tell us even more of their power. Haamer, whose works (and a small number of short stories), possessing strong aesthetic charges, emphasized continuously, how important it is to remain oneself both as a man and a nation, continues with “Eepos” the most principle line of his art. Obviously it is not a co-incident that into the core of the painting are placed together a black arm and a piece a blue-and-white piece of cloth.