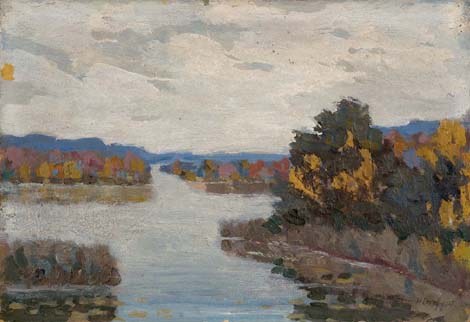 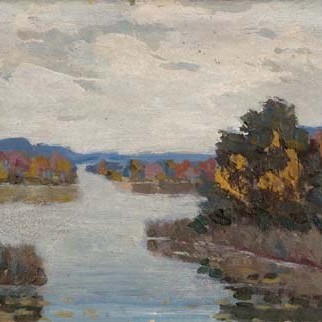 Of the creative heritage of Karl August Hindrey are in the first range known his theatre and art reviews, to a lesser extent also his eye-striking caricatures, which according to Voldemar Vaga where the “only remarkable ones” during the period of WW I. Still, today the examples of Hindrey’s paintings are extremely rare, even though their author’s artistic education was highly prestigeous: the Academies of St.Petersburg and Stieglitz, Munich and the legendary Ažbe School of Arts, Paris and the Private Academy of Colarossi. Furthermore – in 1906 took place the first general exhibition of the Estonian art, where in addition to Köler, Weizenberg, Adamson, Laikmaa was also invited to expose his works … Hindrey.
The painting, which was most probably accomplished at the beginning of the century, reflects totally different creation of Hindrey. Landscape, which has been created by him, is clearly a fantasy landscape, dreamier and more fairy-tale – style than any actual view. Hindrey has let to flow together into the core of the work four separate rivers, trees hanging above them, being painted in a romantic manner in dark colours. Yes, the internal conviction of the work makes us think – maybe such tenderness and sensitivity were actually the main part of Hindrey’s creation?