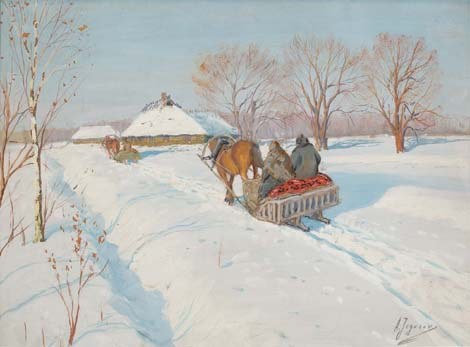 The will of Andrei Jegorov to become an artist was admirable. As a deaf and dumb boy, Jegorov was still able to manage to be admitted to the art school, furthermore – doors in front of a talented student were opened by the St.Petersburg School of Promoting Arts, but also by the Drawing School of the St.Petersburg Academy of Arts. Let us also add here the years of working in Russia and we see how the best traditions of the Russian art formed Jegorov’s artistic handwriting. While comparing the general picture of the Estonian art of that period, possessing the influence of the French, to a smaller extent of the German and Finnish art, we may claim that Jegorov was a great exception in the first half of the century.
Landscape with sleighs is undoubtedly Jegorov’s best known and most often painted motif, the current work is a superb example of this. But this thorough painting shows us, how important was for Jegorov multi-layered painting. From one side of course the romantic and yearning accent of the given motif, sliding away into the depths of the painting. From another side we can see clearly that in addition to emphasizing of the actual value of the motif, Jegorov has also used the depicted motifs in his personal interest. In order to be more precise – with each painting the artist explored again and again the falling angles of shadows, nuances of painting of the snow, depicting of the posture of the running horse, mutual influential spheres of bright blankets, bare trees and bright snow. As an artist, Jegorov painted himself again and again fully into this picture.