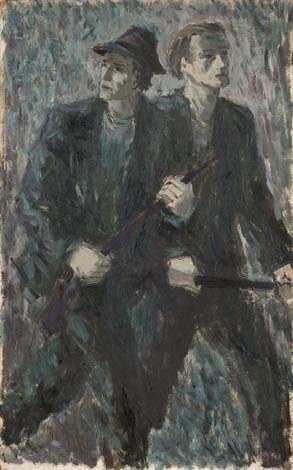 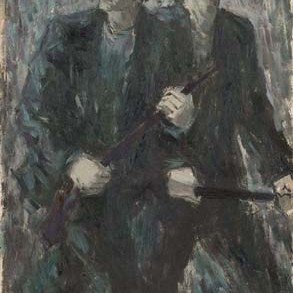 Endel Kõks has repeatedly been called most probably the most versatile Estonian artist, whose style changed during decades to a considerable extent, becoming even contradictory. So he started after the graduation from “Pallas” in the 1930ies as an author, who was mainly being concentrated on colour, proceeding from the post-impressionism of the French school. Leaving Estonia first of all for Germany, then for Sweden, gave Kõks a superb possibility to be continuously in a direct contact with art-related novelties of the world. Kõks reached abstractionism, in the 1960ies even pop-art, in order to dive peacefully during the final period of his life again into peaceful gazing of the world. Still it is said that such versatility may also be an optical illusion, using of the same basis for different solutions. Kõks acquired brilliantly the colour and form handling of the “Pallas” school, he was undoubtedly one of the most significant new artists of the beginning of the 1940ies. The same strong basis also preserved later, preserved also in abstractionism and returned in melancholic depictions of everyday life.
“Luurel” is a rare example in the creation of Kõks. In addition to the very small number of works, originating from the 1940ies, we can talk here also of the traditional spice. Kõks was an author, who through his whole creation was in an accentuated manner detached from social circumstances, and did so most probably especially in the 1940ies, when limitations to the depicted material were especially severe. Under such circumstances Kõks painted a work, which includes a specific decisiveness, an especial desire to resist and attempt to break free. We could again concentrate on the “exact brush strikes” and “sensitive use of colours”, yes, they really do exist, but in this case this is not what matters most. What matters is the artist’s resistance towards the circumstances, the resistance in exactly such a manner he knew the best.