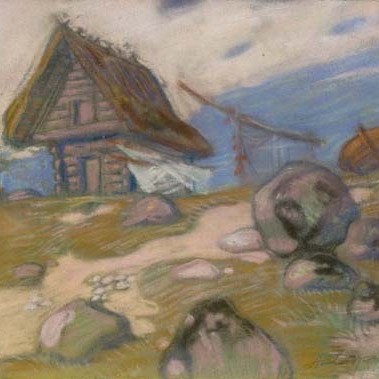 The meaning of Ants Laikmaa most probably becomes clear of the summarised survey of the present catalogue. Even if we concentrate on the most general description of painters of the Estonian older generation, we detect there repeatedly the name of Ants Laikmaa. Both as an artist and as a lecturer, Laikmaa was most probably one of the most significant authors of the first half of the 20. century besides Nikolai Triik, Konrad Mägi and Eduard Wiiralt. The most important part of the creation of Laikmaa, having studied in internationally famous schools, but having been disappointed in their academism, having travelled much and also having lived abroad, still remained views of the homeland.
The present work has been accomplished in Laikmaa’s most favourite technique, in pastels, passing the author’s skill at creating of smooth transitions. Slightly foggy lines, milky hues have been preferred to the clarity of colours. But of the greatest importance is also here Laikmaa’s favourite motif. We recognise “Estonia” not because of the panoramic view or a popular sight, but because of a shed for nets. In the work, which is unexpectedly rich in nuances, Laikmaa draws a clear and personal equation mark between “home” and “Estonia”. Means which he uses for that, means with which Laikmaa generalises and characterises, are actually simple: a piece of cardboard and pastels, a little bit of nature and a single house.