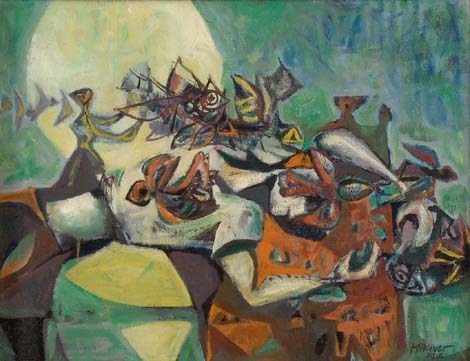 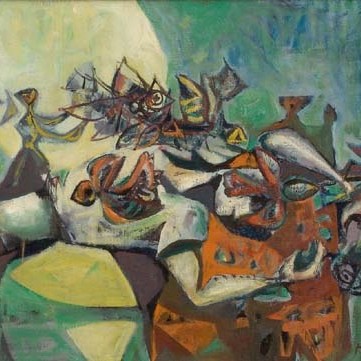 In spite of difficult times, Olev Mikiver was also in the 1940ies able to study in the previous “Pallas”, but it seems that this decided a lot. While looking at one work from 1956, Indrek Hirv said that Mikiver resembled with his use of colours to a great extent the local contemporaries, who continued in their creation pre-war traditions. Mikiver, having continued his studies in Stockholm and Paris, was extremely versatile in his work, being able to work in additon to painting and graphical art also as a stage and shop window decorator. According to Mai Levin, Mikiver reacted in his time “alertly to abstract and surrealistic art”, anticipating so even “Elmar Kits himself”.
Also here Mikiver has proceeded the approach that characteristically to surrealism is full of fantasy. The topic of sports, which arrived in the local art through unnatural pictures of heroism, have been made symbols in Mikiver’s works. Symbols, behind what are speed, but also the will and purposeful setting of targets. Besides that, mellow irony is mixed with modern vision.