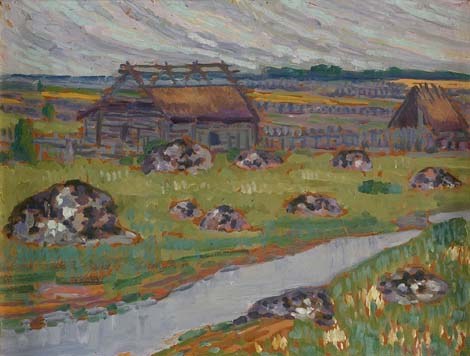 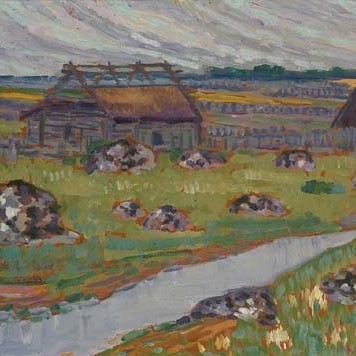 The creation of Konrad Mägi, despite its few examples, seems to be sufficient for everything. These are the works by Mägi, which are being used while talking of the earlier period of the Estonian art history: a number of monographies, several articles and single researches, an uncountable number of repreductions and so on. The creation of Mägi has by today become the business card of the first division of the Estonian art. He is the first and undoubtedly the most significant author, whose works simultaneously marked the birth of national art, beginning of the modern art, emerging of an independent artist’s personality, but also the skill, which until now has remained unique. He is the first author for reseachers, the most popular artist for the general public.
The life of Mägi has by today been so many times written down that adding of something new is more than difficult. Now we also know, how started the most significant period of the creation of Mägi, the series of his Saaremaa-works, where the artist’s improvisational approach found a free and at the same time professional expression. Mägi, having dealt in his youth with sports, but still having quite a poor health, went to a spa in Saaremaa. After the first summer in 1913 followed another in 1914, both times for a couple of months. We may guess that during the short stay, the majority of which took the daily routine of the sanatorium, were not accomplished a large number of works. Before the exhibition, which took place in 1914, Mägi himself writes: “The God has not blessed me much regarding the number of works”. This opinion has later been confirmed by researchers, claiming that there were “around twenty” Saaremaa-works by Mägi. The majority of them are by today in state funds.
But this is Saaremaa, where starts the new era of the creation of Mägi, when “we can talk of him in a more serious manner as of the depictor of the Estonian landscape”. Here his contact with the motif become “close and direct”, appear new “sensual tones, which became characteristic to Mägi in his later creation” (Evi Pihlak).
We are aware that Mägi wandered along the island and was fascinated by the poor and scanty nature, still painting it multi-coloured and powerful. Some of his works were painted only afterwards in the studio, some on the spot. He dated except for a few works none of his works and signed only those, which seemed to him the most successful ones. He worked impetuously, feverishly in a fascination, covering the works with thin layers of colour. “The series of Saaremaa paintings gives an unintentional impression as if they have been painted very eagerly, with a joy of discovering”, writes Evi Pihlak. Motifs of Mägi are at Saaremaa mainly low bushes, sea cabbage, pebbles on the shore, a little bit of sea line. These are things, which we know of the most significant part of the creation of Konrad Mägi.
The present painting still can add to the present text, and add a significant piece of information. Mägi has gathered here the versatile choice of motifs and is also at his painting technique – related artistic peak. The horizon is typically to that period been lifted, the painting surface is filled with stones, which have been painted with small brush strikes and there is a multi-layered green field. But a special and rare spice is added to Mägi’s painting by farm buildings, the roof of one has not even been finished yet and by a river, running in the middle of the painting. Is it only organising of space in a new manner? Or demonstrating perfect skills on different objects? Or is it rendering of the essence of Saaremaa, which would be impossible without depicting of farm buildings? Or is it just a surprising, unexpected and skilful example of the creation of Konrad Mägi, which has been accomplished at Saaremaa?