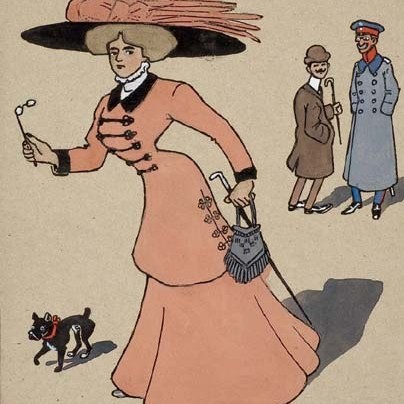 The education of Erik Obermann became very versatile during a short period – already at the age of 17 Obermann went despite his parents’ objection to study art in St.Petersburg, but the too academic approach there directed Obermann further to Munich and Paris. The creative heritage of Obermann, who already four years later died of tuberculosis, remained very few in numbers, but it was extremely impressive. His means were graphical art, more exactly caricature. While studying in Munich, Obermann writes down in his journal that “I myself am not satisfied with everything, but professor says that I progress with giant leaps, which even may be true”. Soon Obermann also organises an exhibition in Tartu, but besides a few remarks there is no more information of works, which were accomplished in Germany, as “only a few drawings have preserved from the works of the Munich period” (Taimo Kuusik). In the work, which maybe originates exactly from that exhibition, demonstrates “very talented” (Voldemar Vaga) Obermann both his brilliant drawing skill, but even more his critical attitude towards false values.