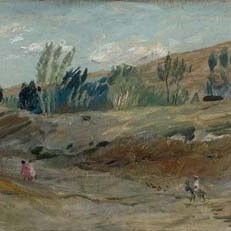 Evald Okas graduated in 1941 the Higher State School of Arts, but the young and talented painter ended almost immediately up in the whirl of the World War II, continuing at the same time drawing, painting and even creating of graphical sheets with a rarely seen consistency. Okas’ being an artist per se never left him – a drawing of an imprisoned German general or a flow of fugitives, whom he saw in the country, characterise well his constant need for art.
The post-war Okas is first of all known by his monumental, elaborately accomplished works of abundant contents. Still we also know another Okas, somebody, who did not accept ordered work, but painted only for himself and did it in such a manner that suited himself best. The present painting has most probably been accomplished at one of Okas’ painting trips. Intimate format and lack of everything fancy, but also focusing of the attention to the landscape, to which is added as a joyful detour a donkey rider, give us evidence of the author’s wish to concentrate on things, which are of real importance.