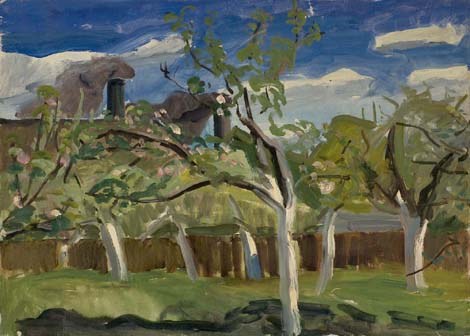 The fate of Henn Roode is similarly to his good friend Ülo Sooster an example of the fact, how being an artist is something inevitable, unseparable from man. Also Roode took up art studies immediately after graduation from the secondary school, but in 1949 he was arrested. Seven years of the most important developing years of the artist remained in the work camp, but Roode returned. His creation strikes the eye both with bold experiments with modern art and also colourful cityscapes, which were rather accomplished for himself. From the latter we can not detect the author’s tragical fate, as on the foreground emerges combination of high colour culture with modern solutions. “Aias” originates from Roode’s highly appraised period of the beginning of the 1960ies, carrying the beforementioned key words. The artist has taken a classical motif, but with a certain accents: instead of a postcard view Roode is looking at an ordinary garden. Instead of exotic colours and thrilling forms, the models of “Aias” are apple-trees, slightly twisted, but not much. We may assume that the key of the present work is the manner, how Roode interprets with a colour pretext white-washing of apple-trees against pests …