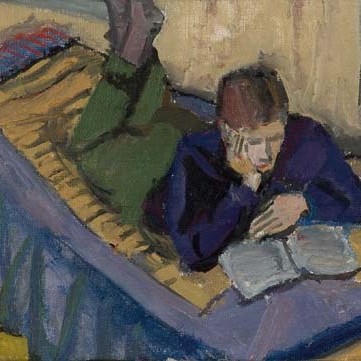 Herman Talvik, “a great artist”, as Eerik Haamer referred to him in a recognising manner, studied prior to his forced leave both in Tallinn in the State Vocational Art School ornamental leatherwork and in Helsinki painting and underwent additional studies in Paris for the period of six years. Despite all of this we know quite little of his paintings, this is mainly because of the reason that while living abroad, Talvik gradually concentrated more on visionary-religious graphical art. Still we can claim while relying on the few existing examples that the paintings by Talvik are something quite different in the general picture of the quite French-inclined older Estonian art, something “cooler and calmer” (Indrek Hirv). In his pictures these are not any more the colour, composition, space division or other clearly painting technique – related solutions, which are on the foreground. In the first range Talvik is interested in thrilling story-telling, using his brilliant painting skill to render the story. The two present paintings have clearly concentrated not on Talvik’s traditional general, but on intimate and detached. A boy, reading a book and playing a trumpet, forward scenes, which at the first glance lack any eternal dimension. Still, these painting become significant just through the artist’s ability to see in the everyday life, in a single moment something sincere and very honest. A direct depiction of a child carries in itself actually the same aims which forward the eternal message of Talvik’s graphical art, reminding us of the uselessness of pretence and everyday medley.
Let us rather read through a book. Or play the trumpet.