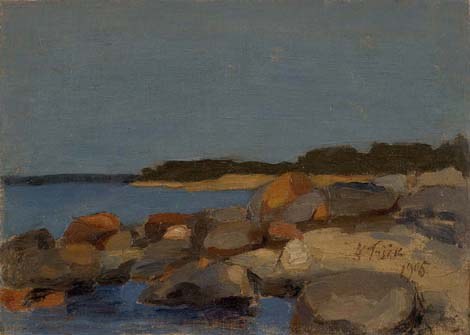 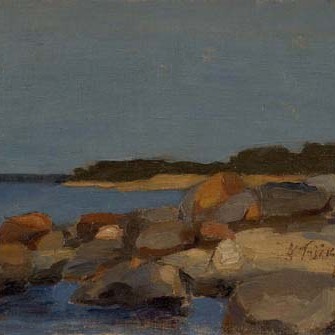 It is difficult to overestimate the importance of the creation of Nikolai Triik in the earlier art history of Estonia. Together with Konrad Mägi and Ants Laikmaa they formed a trio, next to whom is placed the starting mark of the art history of the 20. century Estonia. Of course there were also other authors, but Triik and Mägi were the artists, whose creative stubbornness and brilliant painting technique lifted them to the ultimate top of the most significant Estonian artists ever. It is of importance while talking of Triik that these early years remained his artistic peak. When Konrad Mägi worked intensively until the end of his life, when Ants Laikmaa’s pastel creation was also eye-striking in the 1920ies, then Nikolai Triik dedicated himself after the establishment of “Pallas” more and more to school work, leaving his development as an artist to a great extent into the hands of fate. But we can add one more dimension to this work, maybe the most significant one. While depicting the Leetse seashore, Triik is exactly at the spot his heart most of all wanted to be – near the home farm of his relatives from the mother’s side near Paldiski, in the place where Triik felt himself really happy and free.
Triik’s earlier creation moved to a great extent in the same direction as the creation of Erik Obermann. As a sharp-eyed analyst, the “prankster” (schoolmate Paul Pinna) was able to become with his early caricature creation already a significant author. In 1901 Triik went to St.Petersburg to the Stieglitz School. It is thought that the initiators were his tutors, but often is also mentioned one St.Petersburg doctor, who spent summers in Estonia and who saw Triik’s first paintings. Motifs of these paintings was the Leetse shore…
In St.Petersburg Triik met Konrad Mägi for the first time. With the latter he participated in the revolution of 1905. Both of them left the school at their own will, but this meant only progress. Evi Pihlak writes that years 1905 and 1906 were extraordinary in Triik’s life, they were uniquely full of events. During a year and a half Laikmaa’s studio school, again (!) St.Petersburg, Ǻland and fastening the boots with a violin string, Helsinki, Paris. But in case of the present work it is useful to place the finger between leaving of St.Petersburg and Laikmaa’s studio school, the summer of 1905, when Triik again stayed at Leetse. We can date the present painting according to the weather – summer, the sky somewhat gloomy, but the evening sun seems to be reflecting from the stones. But we can also date the work according to the Estonian art history of the 20.century – the academism of the Stieglitz School of St.Petersburg has just become too tight for this painting. This is just an intermediate stop, personal and meant only for himself. The future is yet unclear, but we already know that Laikmaa is expecting on August 10 the author of “Mererand”.
Ahead were waiting further artistic development and laying the foundation to the figurative art of one nation.
The significance of Triik, especially the extreme importance of his early painting creation, the extreme rarity of his early paintings (Pihlak: “We have no concrete dated material which has preserved of Triik’s landscapes during these study years”), the impressively elaborated and skilful works. Yes, we can detect all of the beforementioned in this work. But furthermore: the Leetse shore, summer weather, restless times – Triik’s life or his happiest days are exactly in this work…