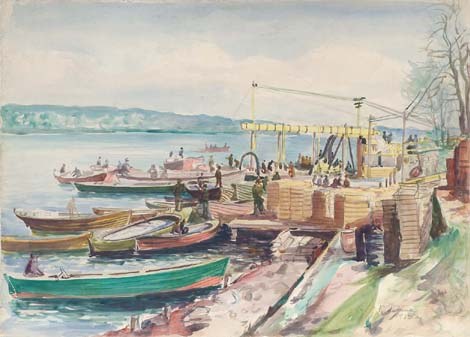 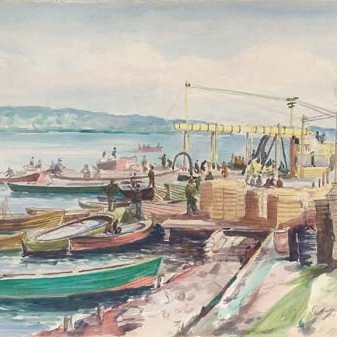 Richard Uutmaa and the sea theme have become unseparable in the art history. Uutmaa, having been born at Altja as a seaman’s son, graduated from “Pallas” in the 1930ies, but it is an interesting fact that the sea theme was at that time not widely spread in the local artistic picture. Uutmaa’s multi-layered sea research, which ranged from the depiction of the life of the coastal people to the romantic nocturnal views of the shore, found quickly recognition and became since 1960ies also very popular among wider public. Still, Uutmaa was able to preserve in his early works despite the popularity of the theme also a clear artistic vision and underline key words, which were of importance to him.
“Sadam” was painted in 1950, during the period, when Uutmaa, who had just become an assistant professor, unexpectedly decided in the favour of the status of a freelancer. This decision, which was most probably caused by the desire to break free from official bonds, also ends up in “Sadam”. The author, who starts with water-colours in a more serious manner only a dozen years later, makes here one of his early experiments, but there is something completely new also in the brilliant figural grouping – something more free, open, vigorous. From another side Uutmaa continues here the traits, which are characteristic to his better works on the sea theme: he does not remain indifferent and enjoy the view as a by-stander, but steps in, ties life and sea clearly together, shows (as a seaman’s son!), how the sea and people are closely connected, how the latter depend on the first.
“Sometimes I have looked back and wondered, how many end have been given to the sea …”