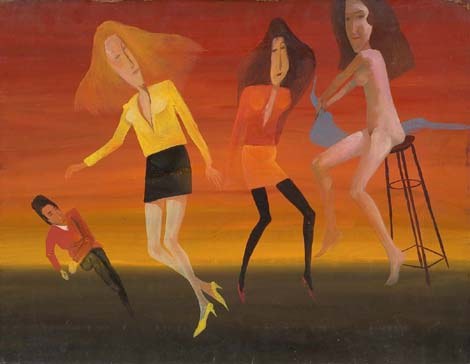 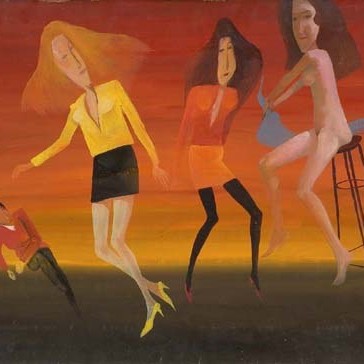 The works of Edgar Valter most probably exist in our public knowledge to a greater extent than the works by anybody else. Valter has created through caricatures and illustrations his own mythology, an understanding of which values Valter’s creation is carrying. As a self-study person, he has been free from all fashion trends, but also from rigid form requirements. “Figures” is a clear illustration of both assertions. An originally solved painting, where single figures remind with the abundance of colours of their clothes and life optimism features, which are characteristic to pop, are even youthful and they have been placed in a surrealistic surroundings. Leaving the background not painted out, seems to be a clever trick, which has been thought out by Valter and the aim of which is to emphasize the impetuous and aerial situation. Here we can detect the angle of vision which has the effect of retro and sophisticated style, true to the period, but as a legendary by-stander, Valter is not over-refined. In the first range he is interested in the situation, moving people, strange colour solutions, dash of the dance.