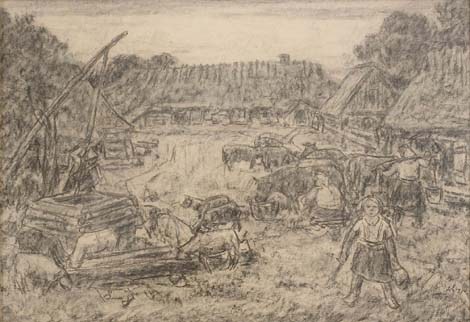 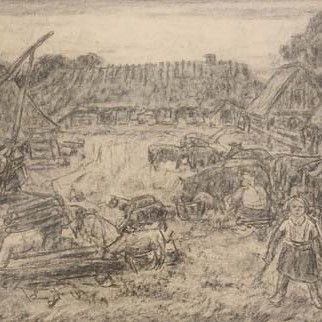 The way of Johannes Võerahansu to art could be compared with that of Henn Roode: studies, which were commenced in the youth, were discontinued due to circumstances for a longer period, but were later continued already without any hindrances. Studying under the guidance of Ants laikmaa continued in “Pallas” after a 11-year pause in the 1930ies. Already during his schooltime Võerahansu started with paintings of silver colouring, rich in light, which “already then belonged to the top pieces of art, which poetisized the Estonian mode of life and nature” (Hilja Läti). But already in the 1920ies Võerahansu had taken up and concentrated on drawings, receiving in 1928 the consolation prize of the Board of Foundation of Figurative Arts. Let us mention – miller’s assistant Võerahansu had been by that time already seven years away from artistic education.
Võerahansu turned to drawings again in the 1960ies, when they became the central axis of his creation. “Karjaõu” belongs to his best known series with views of Saaremaa – a motif, which Võerahansu explored in his paintings already in the 1930ies. Similarly with those works, also here is much air, the author has not been interested in elaborating minor details. Still the drawings also contain much etnographical material, picturing of the moment. While glancing at the accomplishing year of the work, we may, if we want, see also here at least an indirect hint to Estonia of the 1930ies.